Rafe Esquith suggests how to get teaching outside the classroom

With 30 years of classroom experience, Esquith has designed his own curriculum that has had educational administrators questioning his tactics for years. Author of Teach Like Your Hair is On Fire, which has been translated into Thai, Esquith has made school for his students a unique and enjoyable experience. 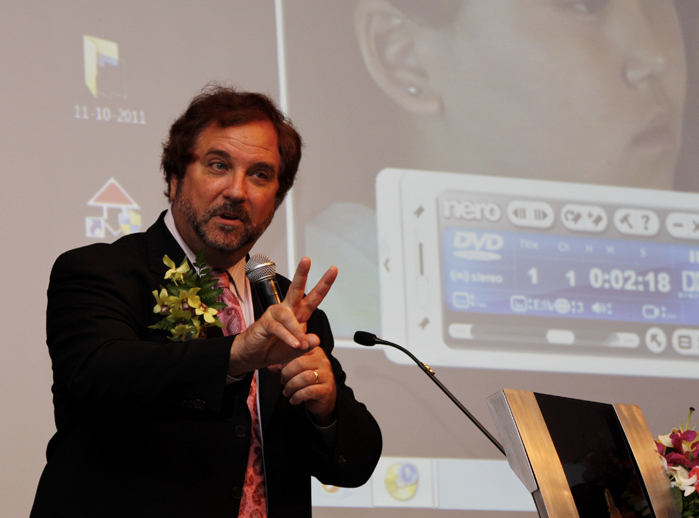 It’s 4:30am and Rafe Esquith’s alarm is going off. For the Hobart Boulevard Elementary School teacher, this is just another day on the job. But the way he teaches is anything but ordinary. With 30 years of classroom experience, Esquith has designed his own curriculum that has had educational administrators questioning his tactics for years. Author of Teach Like Your Hair is On Fire, which has been translated into Thai, Esquith has made school for his students a unique and enjoyable experience.

“I think one thing teachers learn from me is taking chances even if it means falling on your face,” Esquith said. “What I do is work around the system. I don’t really fight the system, even though I’m a bit of a rebel.”

In October, Esquith attended the Thai Book Expo to share his unconventional teaching techniques with local teachers. A capacity crowd listened intently as he talked about the importance of bringing real life lessons into the classroom and doing away with traditional texts. Many teachers admitted to Esquith they wanted to try many of the suggestions he made but didn’t know where to start.

“One wonderful thing I’ve learned here is that the administrators I’ve met are very bright and very caring. That’s not always the case in big systems,” he said.

By 6am, when most of Los Angeles is still sleeping, Esquith is pulling up to a school of eager students; in fact, most of them are waiting for him to open the doors.

“I beg them not to be there at that time and tell them to come later,” he said with a laugh.

He spends an hour setting up the class for the day while students blast rock music and prepare for an optional maths tutorial; Esquith said that “optional” to his students means nothing, with almost every student attending the 7am maths practice.

Hobart Elementary is the second largest elementary school in the United States, with more than 2,000 students who come from mostly poor and immigrant families. When Esquith first started teaching at the school in 1984 he realised traditional teaching methods were not going to work for these students.

“We don’t read the school texts because they’re boring,” he said. “In the early days, the detraction hurt. Anyone who tries something different gets pounded by others in the teaching profession.”

In place of the boring texts Esquith introduced Shakespeare, Mark Twain and baseball, things many in the United States public school system questioned as learning tools in the classroom. But it didn’t stop Esquith. What he was beginning to realise was that while traditional teaching practices may work for some students, the curriculum falls short in preparing students for real world situations. He was also teaching students who didn’t speak English as a first language.

“I thought if you’re going to learn English, Shakespeare wrote it pretty well, so let’s give it a try,” Esquith said. “I never thought this would happen.”

Throughout the school year students study some of Shakespeare’s greatest works, including Hamlet, which Esquith believes is a play full of “quote after quote about wisdom.” Every April, classes perform a play as a part of the Hobart Shakespeareans. Their performances have drawn such rave reviews that they have performed for the Royal Shakespeare Company, the Globe Theatre in London and at the Ahmanson Theatre in Los Angeles.

When the students aren’t reciting the Bard, Esquith keeps them busy with science, history, maths and literature. But again, he goes outside the traditional teaching box to educate students on life lessons.

“Then we play baseball, which is a religion in my class,” he said with a chuckle. “It’s the most democratic game because everyone gets a chance to bat. And what is the goal in baseball? To be safe at home; I think even the language of the game is beautiful.”

For as many detractors as Esquith has had in the early years, they’ve grown silent with his success over the years. His 5th-grade students are consistently in the top 10% of the country’s standardised tests. He’s received accolades including the Sigma Beta Delta Fellowship from John Hopkins University, Oprah Winfrey’s $100,000 “Use Your Life Award”, Parents Magazine’s “As You Grow Award” as well as the National Medal of Arts, and he is also an honorary Member of the Order of the British Empire.

“The New York Times once called me a genius and a saint,” he said. “I’m not that impressive. I have people that make me good. Nobody does this alone.”

While Esquith remains rooted in humility and continues to deflect praise on to others, thousands of students worldwide rave about their days in his class. Esquith says the reason he does it is simple.

“In the US they always talk about equal opportunity _ well kids aren’t getting it and that’s where the passion comes from,” he said. “I don’t want them to dread going to school and most kids do.”

His book, Teach Like Your Hair’s on Fire (2007) is a bestseller around the world and has been translated into Thai by Quality Learning Foundation (QLF).

Quality Learning Foundation (QLF), a new state agency created under the Prime Minister’s leadership and regulated from the Prime Minister’s Office. It seeks the Promotion of a Learning Society and the raised quality of Youth and Children Education and seeks to take new initiatives in the Thai education system, encourage education reform and accelerate quality learning.